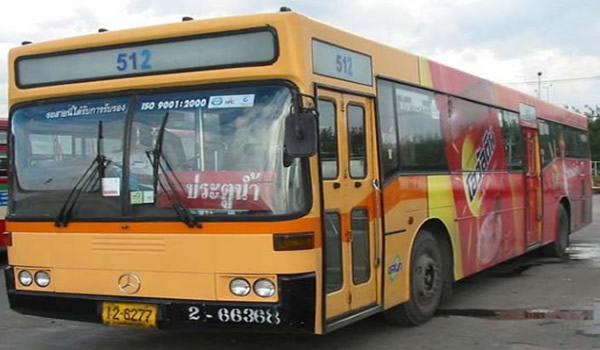 Courtesy picture bmrt.co.th
Public buses are plentiful and very economy, not more than 20 Baht maximum fares to most destinations within Bangkok. Air-conditioned buses within metropolis have varied from destinations, but not more than 50 Baht respectively. Red, Gray and Micro buses are also cost the fares in single route. A bus routes map is available at most hotels.
BANGKOK RAPID TRANSIT (BRT) 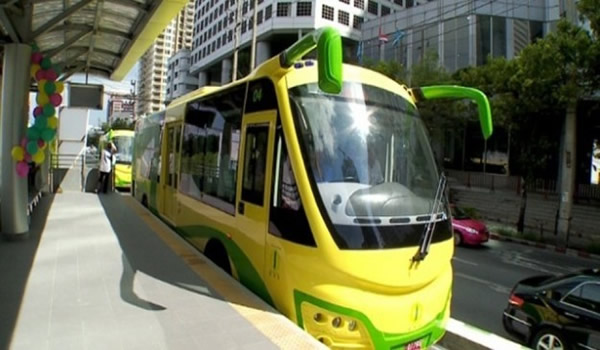 Courtesy picture wikipedia
Starting from the intersection of Sathorn Road - Narathiwat Rajanakarin Road which is connected to the BTS Skytrain (Chong Nonsi station and Talat Phlu station). They serve passengers from Sathorn and Silom business district including crowded passengers on the BTS system. BRT will run along the Narathiwat Rajanakarin Road through Chan Road. And go on the section of Nara Ram 3rd Road, then turn right onto Rama 3rd Road and Rama 3rd Bridge across the Chao Phraya River to end at the junction of Ratchadapisek-Ratchapruek Roads (See Map). Fortunately, It is expected to accommodate a vast number of passengers from residential and office buildings along the path. BRT Ratchaphruek station prepares a wide car park and can run on the BTS (Talat Phlu station). See Map. 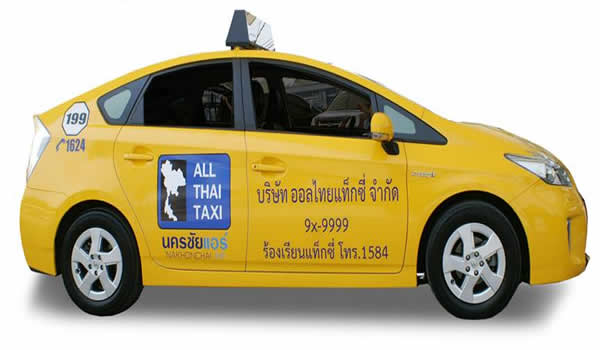 Hotel taxis have fixed tariffs for destinations. Taxis are cruising the streets in Bangkok, maybe chauffeuring to neighboring provinces if you hire them but please remind very much that so very expensive, designing "Taxi-Meters" on car roof charging from 35 Baht for the first 3 kilometres, and approximately 5 Baht for every kilometer thereafter.

Tuk-Tuk or three wheels taxi are quite popular among the tourist for short journeys around Bangkok. Fares range from a minimum of 30 Baht to a maximum of 150 Baht according to the destination is. Ah!! Fares can be bargaining down. 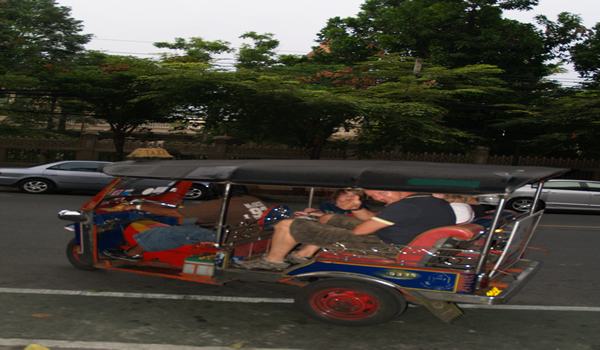 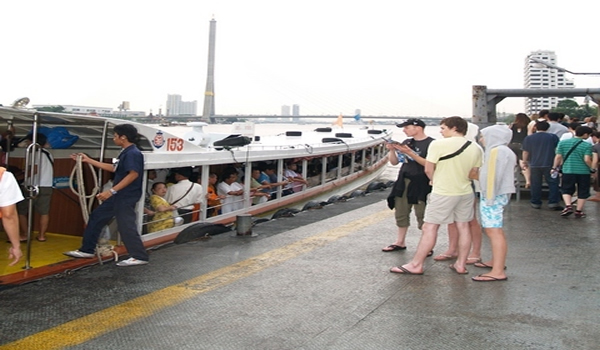 There are many companies doing business on the Chao Phraya River, but the most popular so much for visitors in Bangkok is the Chao Phraya Express Boats (Thai's wording: Ruaa-Duan-Chao-Phra-Ya). They have 4 styles of services: (See Styles) NO Flag--get on and get off every piers, Orange Flag--get on and get off some piers that stop less than No Flag, Yellow Flag--get on and get off at destinations, for this style, the Yellow flag is the fastest but most money; therefore, before ticketing ask collector first (See Boat Fares) for the last style is Green Flag--get on and get off from Pakkret (N33) passing through Nonthaburi (N30), The Wet (N15), Tha Chang (N9) and any more. Actually, Nonthaburi--Pibul 3 Pier (N30) is a hub of all style boats as same as Central Pier {Sathon-Saphan Taksin (BTS S6 Station)}. They are cruising from neighboring district, Pakkret (N33), Muang Nonthaburi-- Nonthaburi province (N30), till Sathorn or Silom (Central Pier), in Bangkok. Getting on boat at Banglumpu--Phra Arthit Pier (N13) and then get off Tha Chang Pier (N9) for traveling to Grand Palace is the first step to experience this service (See Boat Pier). If you stay around Banglampoo area, ridiculously, we thought you should take a walk worthy. See Rattanakosin Map.
SAEN SEAB CANAL EXPRESS BOAT 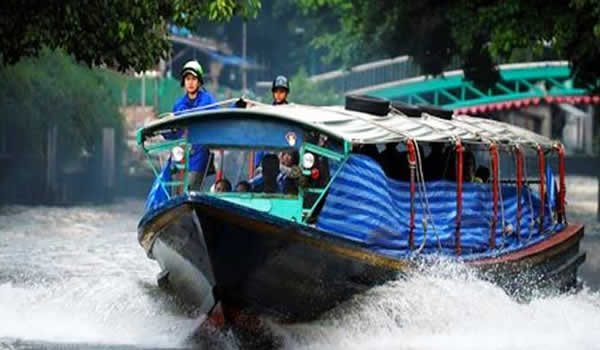 Courtesy picture Family Transport
The new dimension for canal transportation is Saen Seab Canal Boat | センセーブ運河ボート | เรือคลองแสนแสบ that help Bangkokian to reduce the rush hour time for morning workdays and travelling neighbouring district of Bangkok. The fare is very inexpenpenve between 10-20 Baht, but the route is so long more than services from Phranakorn district to Bangkapi district. Saen Saeb Canal Boat serves from Panfa Leelard Bridge (W3) near Golden Mount Temple to Westwards of Bangkok's Wat Sriboonreung (E22), Bangkapi district.
"The Khlong Saen Saep Express Boat service operates on the Khlong Saen Saep in Bangkok, providing fast, inexpensive transportation through the city's traffic-congested commercial districts. The service has a checkered reputation, due to the polluted water in the khlong and the haphazard nature in which the service is operated.
The 18-kilometre route is served by 100 boats of 40-50 seats, and operates 05:30 a.m. to 08:30 p.m. daily on weekdays (07:00 p.m. at the weekend). Prices are 8 to 20 baht--Check Prices, depending on distance travelled. The service carries about 60,000 passengers per day. It is run by a company called Family Transport." Khlong Saen Saep Express Boat's wrote.

SELF JOURNEY IN BANGKOK 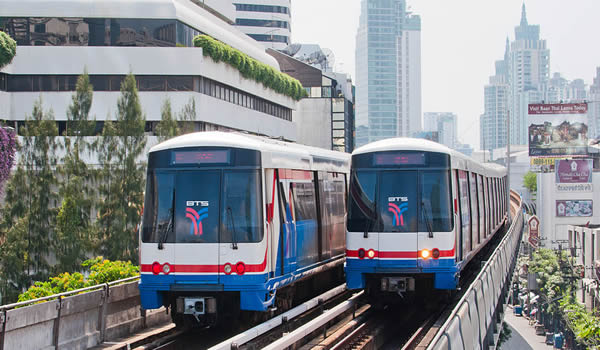 Similar to your country, Western countries and developed Asian Countries, we are next step developing country, so innovations and civilizations are glowing up from GDP's. BTS Sky Trains have 2 lines (see map)--the first is starting from the North Eastern-Northern Bus Terminal (Mo Chit (N8), Chatuchak Weekend Market) to Kheha (E23) off Samut Prakarn province (Sukhumvit Road); Visitors can get off this Kheha station (E23) in order to travel Crocodile Farm and Zoo, and the other line is starting from the National Stadium (W1) (Siam Square area, MBK) passing Silom Road, Sathorn Road, to last station, Bang Wa Station (S12) located at Thonburi district. This line conveys passengers crossing the Chao Phraya River. Fare begins 16 and not over 60 Baht (Check Prices). The service is available from 06:00 a.m. to 12:00 p.m. Travel assistance calls 0-2617-6000, 0-2617-7341
BANGKOK SUBWAY (MRTA)
Mass Rapid Transit Authority of Thailand 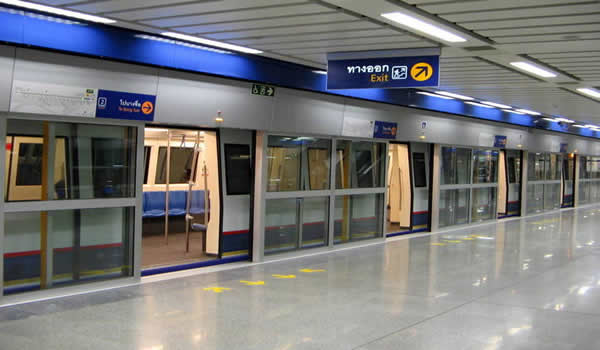 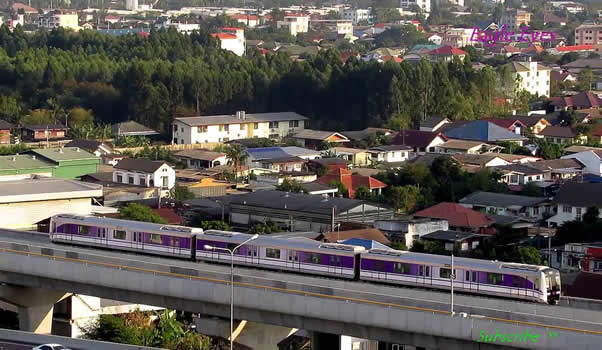 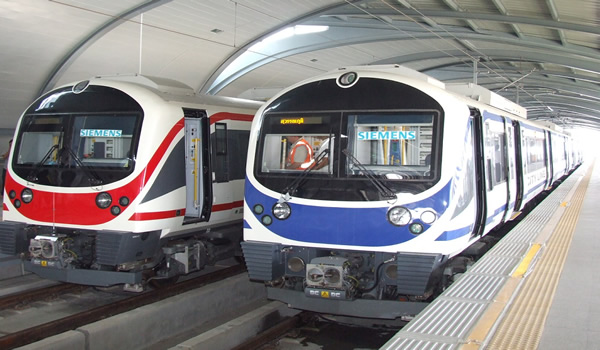 1) Suvarnabhumi Airport express train (SA Express):
Providing for passengers with high-speed air-conditioned trains with 4 bogies that one of them is a container for transporting goods. It run direct between Makkasan/Asoke to Suvarnabhumi Stations. Time within 15 minutes. Fare is 150 Baht per trip. It provides service from 06.00 to 24.00 everyday. (Check Price)
2) Suvarnabhumi Airport City Line (SA City Line):
Providing passengers and dwellers launching from the first station (See Map) at Phyathai and then Ratchaprarop, Makkasan, Ramkhamhaeng, Huamak, Ban Thab Chang, Lat Krabang and the last Suvarnabhubi International Airport Stations respectively. Which passes all 8 stations through the final destination, Suvarnabhumi Airport Station within 30 minutes. It covers a distance of 28 kilometers. Ticket begins 15 not over 45 Baht per one way. It provides service from 06.00 to 24.00 everyday. (Check Price)
3) Baggage Check In: Passengers and travellers are able to check in* and load all luggages in Makkasan Station. For more inquiry call 1690 (24 hours) or +66 2308 6500 ext. 2906, 2907
*Only passengers of Thai Airways International Airline before take-off 3-12 hrs. 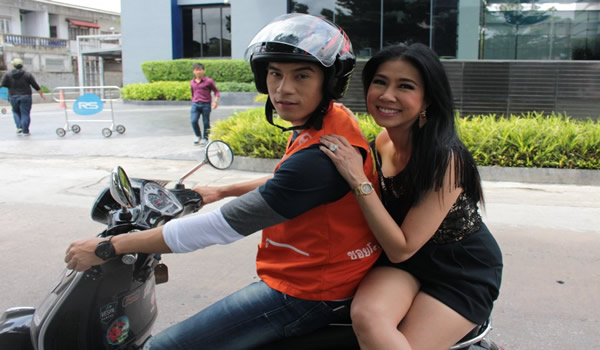 Courtesy picture tv.mthai.com
Thais call "WIN" (Thai wording: translates from English--"be the winner in contest or competition~") for those whose drivers turn on serviced motorbike' engines reaching wherever is. As we've mentioned above, as the meaning of word "WIN", the motor bikers are worried about their time to speed and reached the destination by competition with others, so they are not mind though you will always remind them that you are driving so fast!!. The last answer of Thais, mostly don't mind about their safe, they're so worried about the time hanging with traffic ways. It's the alternatively decision for you as we've been proud to attention before choosing. Trying, it's amazing.
It's time for you to choose that vehicles are suitable and worth for your destination. Think before making an appointment that Bangkok's one of the traffic jam city. Planning your journey better than wasting your time on the road or loosing your mind in the city.
We wish you enjoying pleasant and amazing travelling in Thailand.