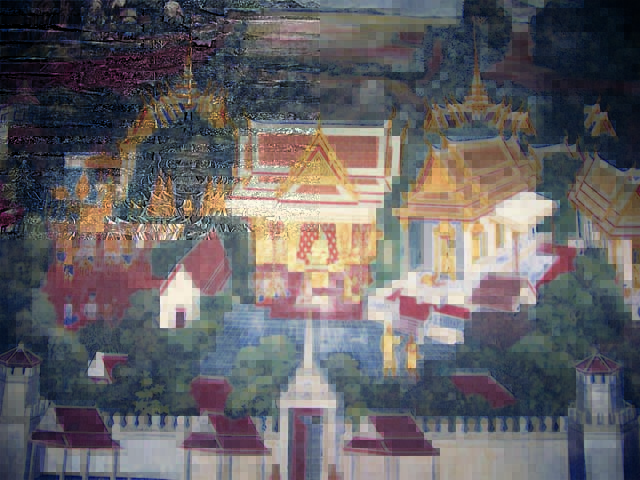 Thailand was known for centuries by outsiders as SIAM. It is the first real impression on the West at the end of the 17th century, through the reports of a series of inquisitive Frenchmen. However, they were not the first Europeans to spend time in the kingdom. The Portuguese sent an envoy to the Capital in 1511, shortly after they seized Malacca. They joint resident Chinese, Japanese, Malays and Persians to make the Siamese capital one of the most cosmopolitan cities in the vast region now known as Southeast Asia. Modern and predominantly Buddhist, it is the Southeast Asian kingdom whose ancient equilibrium and present standing mingle in evolving harmony.
Substantially, Thailand’s distinctive and unparalleled characteristics stem from Indian and Chinese influences (harmoniously blended by Thai eclecticism), rich ethnic diversity, abundant natural and human resources, and over seven hundred years of cherished independently (Thailand is the only important Southeast Asian Countries never to have been colonized by Westerns). Thai traditional culture is delicately tuned to the time honoured Buddhist’s non-confrontational approach to life, and ideal of charity, tolerance and loving-kindness. 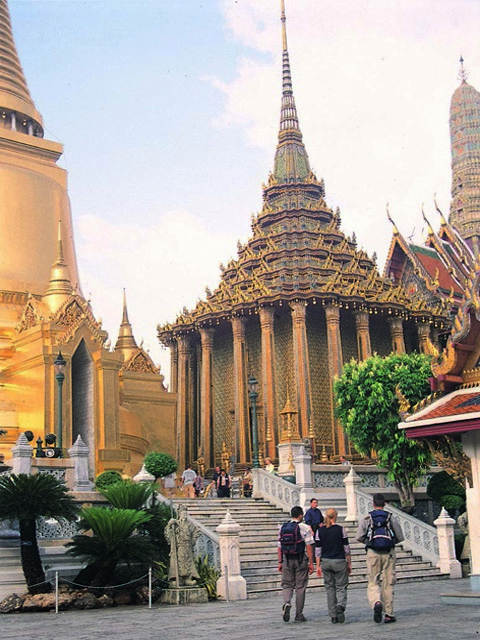 About Thai History: Thais, the most historians believe, began migrating from southern China in the early part of the Christian era. At first they formed a number of city-states in the northern part of what is present day Thailand, in places like Chiang Sean, Chiang Rai and Chiang Mai, but these were never strong enough to exert much influence outside the immediate region. Gradually the Thais migrated further south to the broad and fertile central plains, and expanded their dominance over nearly the entire Indochina Peninsula. Contradictory as it may seem, however, recent archaeological discoveries around the northeast hamlet of Baan Chiang suggest that the World’s oldest Bronze Age civilization was flourishing in Thailand some 5,000 years ago. Read more World Heriatages in Thailand. 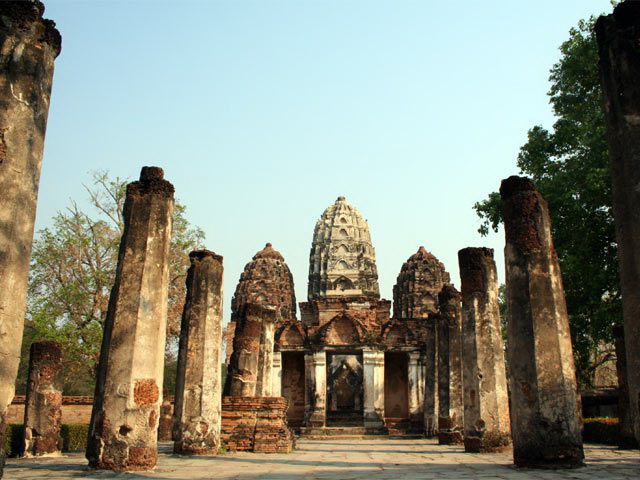 Sukhothai Era (1238-1350 A.D.) By the early 1200s the Thais had established small northern city-states in Lanna, Phayao province and Sukhothai one (now-a day). In 1238 two Thais chieftains, Khun Bang Klang Tao and Khun Bang Pah Muang, successfully rebelled against Khom suzerainty and established the first truly independent Thai kingdom in Sukhothai province-a kingdom that was short-lived but of immense cultural importance in the nation’s history (Loy Kra Thong-the candle-lights floating festival). Sukhothai saw Thai’s gradual expansion throughout the entire the Chao Phraya River basin and the establishment of Theravada Buddhism as the paramount Thai’s region. It was here that the first evidence of written Thai Alphabets was left, along with distinctively Thai styles of arts such as paintings, sculptures, architectures and literatures, which survived after Sukhothai was absorbed by the kingdom of Ayuddhaya-a dynamic young kingdom further south in the Chao Phraya River valley. Read more Sukhothai Historical Park (World Heritages in Thailand). 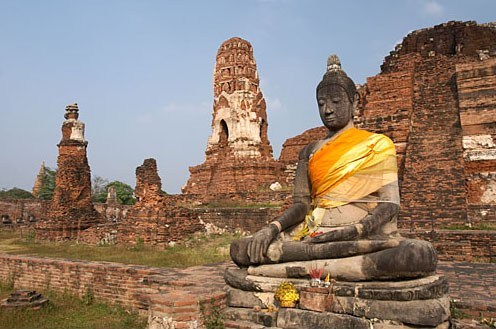 Ayuddhaya Era (1350-1767 A.D.) During Ayuddhaya 417 years as the capital, under the rule of 34 kings, the Thais brought their distinctive culture to fall fruition, totally rid their lands of Khom presence, and fostered contact with Arabian, Indian, Chinese, Japanese and European powers. Contact with the Western countries, especially, flourished during the reign of King Narai the Great (1656-1688), in which an envoy was sent to France to agree foreign diplomacy. Founded in 1350, Ayuddhaya remained the Thai capital until it was sacked and burnt by the Burmese in 1767. Read more Ayuddhaya Historical Park (World Heritages in Thailand). 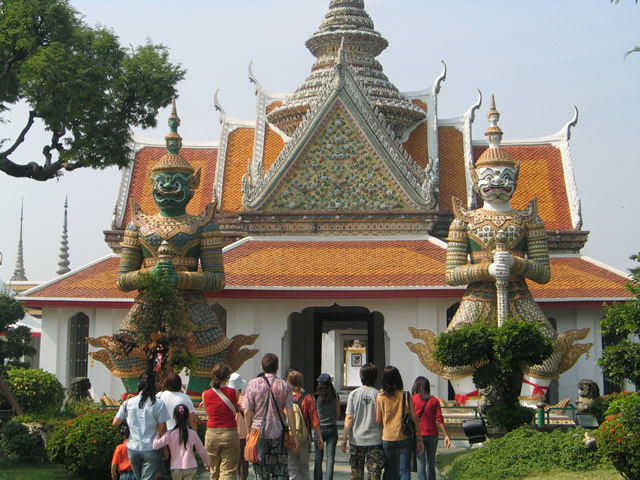 Thonburi Era (1767-1782 A.D.) Ayuddhaya’s downfall was a severe blow to the Thais. However, the Thais revival occurred within a few months, and the Burmese were expelled by King Taksin, who ushered in the Thonburi Kingdom. Unfortunately, King Taksin built Thonburi to capital, but it was the shortest-lived capital in Thai history just 15 years powering. In 1782 the first king of the present Chakri Dynasty, Rama I (Phraphuddha Yodfa Chulaloke Maharaj) established his new capital on the site of a riverside hamlet called Baan Kok (Village of the Wild Olives). 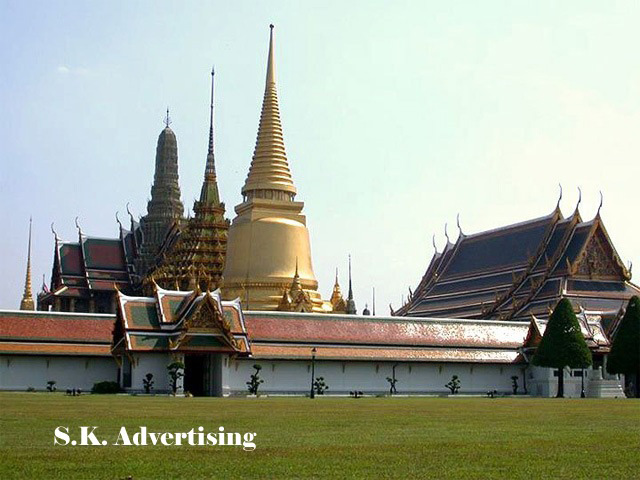 Rattanakosin Era (1782 till present day) Among the Rattanakosin Era, two Chakri monarchs, King Mongkut (Rama IV),  who reigned between 1851 and 1868,  and his son King Chulalongkorn (Rama V, 1868-1910), saved Thailand from the powering tides of Western colonialism through adroit diplomacy and select modernization (cancelled the slaves-housed)
Today, Thailand is a modern constitutional monarchy. Since 1932,  Thai Kings, including the present monarch His Majesty King Bhumibol Adulyadej (Rama IX), have managed their Legislative powers through a national assembly, their Executive powers through a cabinet headed by a prime minister and their Judicial powers though the Courts of Law.
Thais have a deeply traditional reverence for the Royal Family. And you, a lovely visitor should be careful to show respect for the King, the Queen and the Royal Family alike.
Enjoy and spend your holiday vacations in Thailand, you’ll never forget and unbelievable what SIAM is. Amazing Thailand, the lands of thousands friendly Smiles, holiday never ends!!!
We wish you enjoying pleasant and amazing travelling in Thailand.